There's only one theremin lounge band, and that's Project: Pimento! Get out your cocktail shakers and prepare to party in sophisticated style. Project: Pimento is a five-piece band from San Francisco, with a repertoire of toe-tapping lounge favorites from the 40s, 50s, and 60s...all with a space-age twist!

Project: Pimento also features the smooth sounds of Robby Virus on the theremin. Invented in the 1920s, the theremin was the world's first electronic instrument. The theremin is notoriously difficult to master, since one must "play" the air around it without actually touching the instrument itself. Dr. Virus is one of the world's few theremin virtuosos, and conjures up high-class, jet-set elegance with his smooth melodies.

With a shaker full of swank tunes, and a rhythm section that will drink any flaming cocktail you put in front of them, Project: Pimento promises hi-fi-hi-jinks for all!! 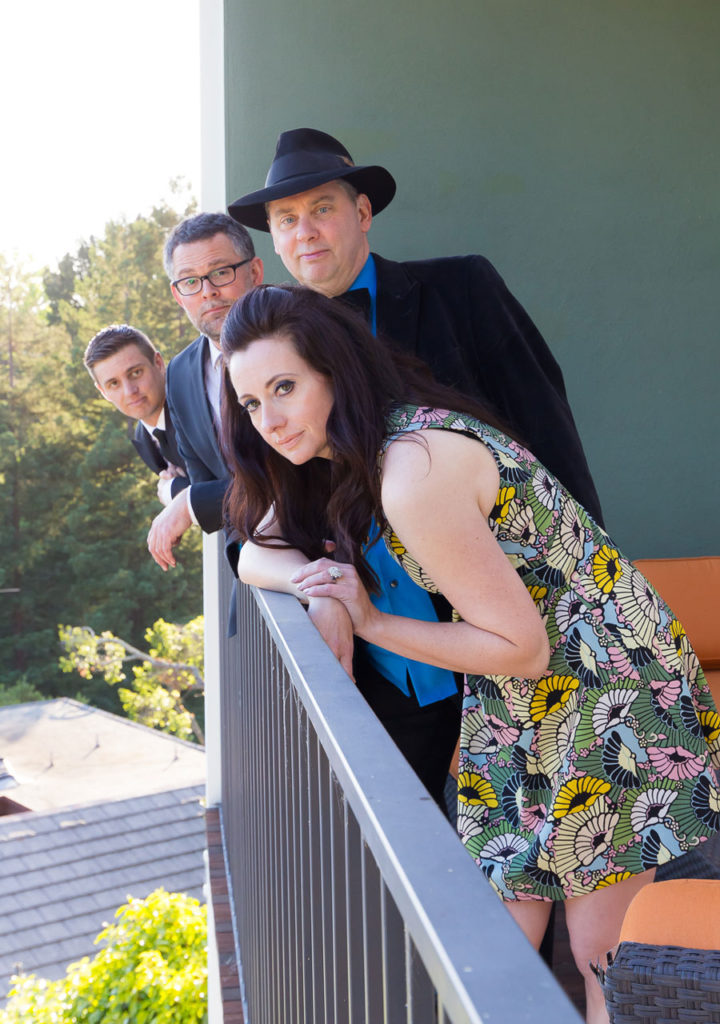 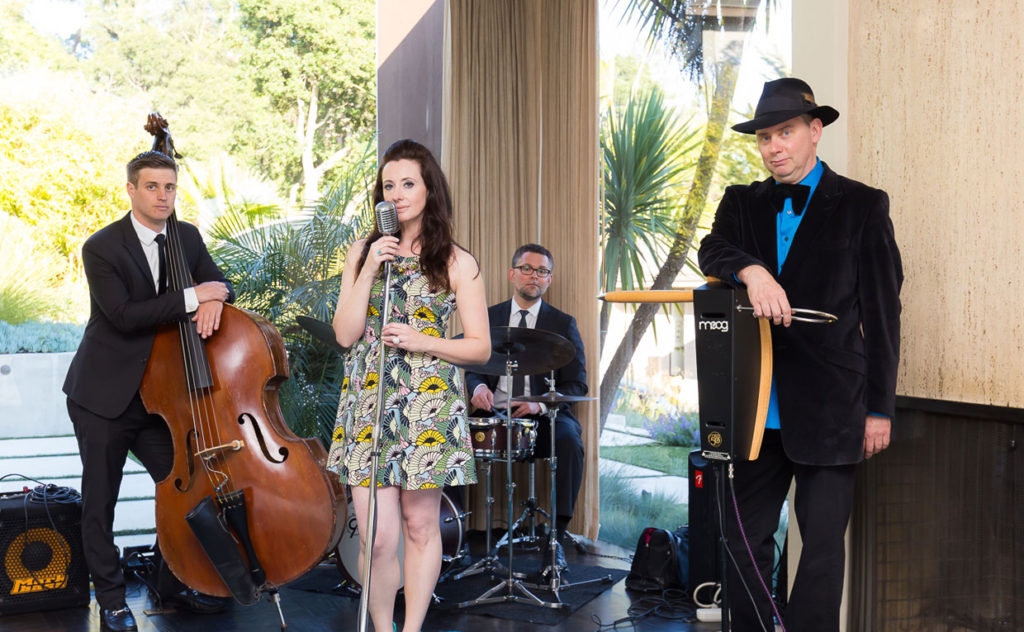 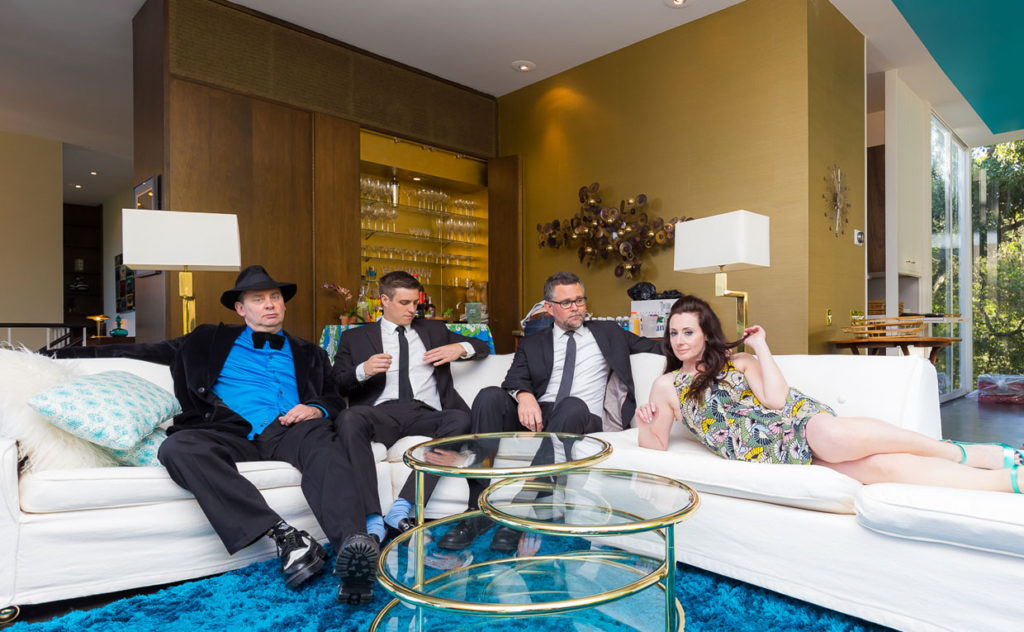 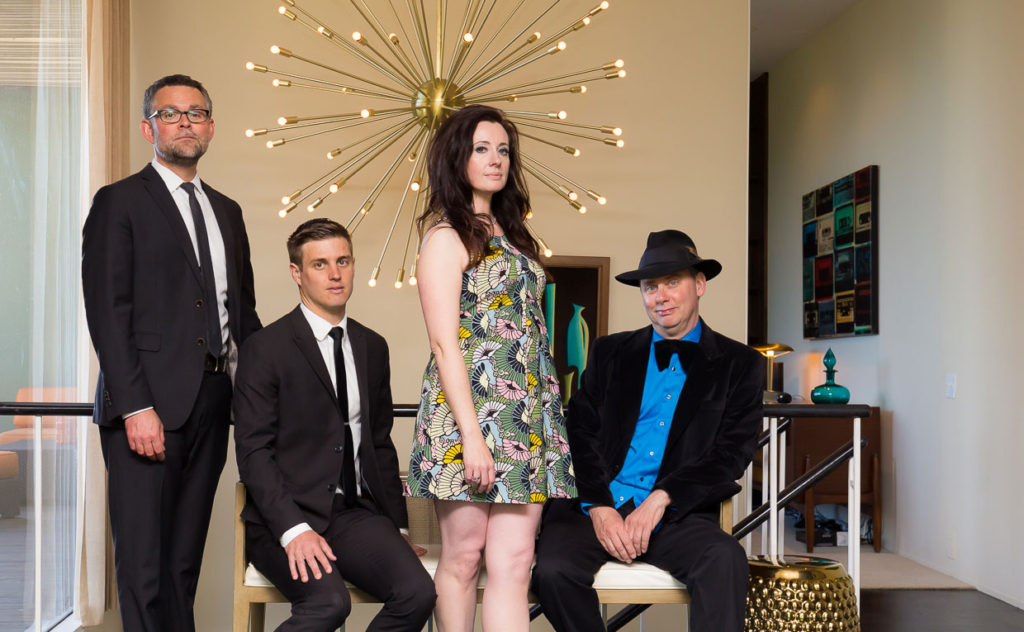 "A staple of low-budget 1950s sci-fi movie scores, the theremin-an electronic instrument that emits a wonderful wavering tone-isn’t heard too often nowadays. That’s a shame, because, as Project: Pimento proves on their debut, in the right hands the device still sounds fascinating and fresh. Inventive interpretations of 12 vintage tunes, including “Diamonds are Forever” and the Star Trek theme, sparkle with substance and style, adding a stirring, “space age bachelor pad” patina to a thoroughly intoxicating collection."

"Space-age theremin lounge band Project: Pimento serve up their cocktails with a twist. The group plays all manner of fabulous favorites, like "Moon River" and "Desafinado," plus other tunes from the '40s, '50s, and '60s. They also spice up their sets with some great swanked-out pop songs and soundtrack music, such as covers of James Bond themes. The band mixes the mysterious and hypnotic sounds of the theremin with jazz and swing, creating a bizarre and unique sci-fi effect like a Vegas lounge scene reenacted on a Martian colony".

"Highlights of the show included Project Pimento's loungey take on
the Dead Kennedy's 'Holiday in Cambodia'."

"Lori Carsillo from lounge act Project:Pimento gave us a sultry version of Santana's 'Black Magic Woman,' while Robby Virus rendered a sizzling Latin lead by waving his hands over a theremin."

Nomination:
Project:Pimento was nominated for an SF Weekly award in the “Lifestyle” category for 2002 and 2003

CD Review By Will "the Thrill" Viharo

"From Samuel J. Hoffman to the Beach Boys, from Spellbound to The Day the Earth Stood Still, the Theremin has been used by many bold, experimental musicians throughout pop history to evoke an ethereal, exotic, esoteric mood. Following the lounge revival of the '90s, which included the resurgence of interest in vintage film soundtracks, the Theremin has once again captivated the musical imaginations of a new generation. There was a hit documentary on the tragic life of the odd instrument's creator, Leon Theremin, which also contributed to the renewed awareness and appreciation of the unique "woo-ooo-ooo" sound so many had grown hearing in B sci-fi flicks. The popular alternative art-rock band Portishead was among the first of the new bands to occasionally sample this electronic enigma.

It seemed inevitable that some band sometime was going to employ the Theremin full-time. Finally, the first Theremin-lounge band is here, and man, am I happy! San Francisco's Project:Pimento, which features sultry siren Miss Lola Bombay (Lori Carsillo) on lead vocals, Robby Virus on the Theremin, "gentleman jack" McMorrow on guitar, "Top Shelf" Rich Livingston on drums, "Maker's Mark" Thomas on bass, and on their debut CD, special guest Nick "Martini and" Rossi on the Hammond organ, offer the waiting world their first studio album after years working the Bay Area nightclub circuit.

Their choice selection of lounge standards like "Call Me" and "Sway" magically mingle with exotica ("Bali Ha'I", "Caravan"), jazzy spy soundtracks ("Diamonds are Forever"), sci-fi themes ("Star Trek"—with lyrics!), and even '70s Santana ("Black Magic Woman")! My favorite track is their version of "Peter Gunn," a tune which has been covered to death by everyone from Ray Anthony to The Cramps, but you haven't ever experienced Mancini's masterpiece with a Theremin before (it's also the seldom heard "Bye Bye Baby" version, which includes lyrics!). Project: Pimento is one sexy sonic tonic for the senses, a space-age cocktail to intoxicate and soothe your shell-shocked soul, a rocket ride through the tiki bar of your brain. Martinis on the moon, anyone?"